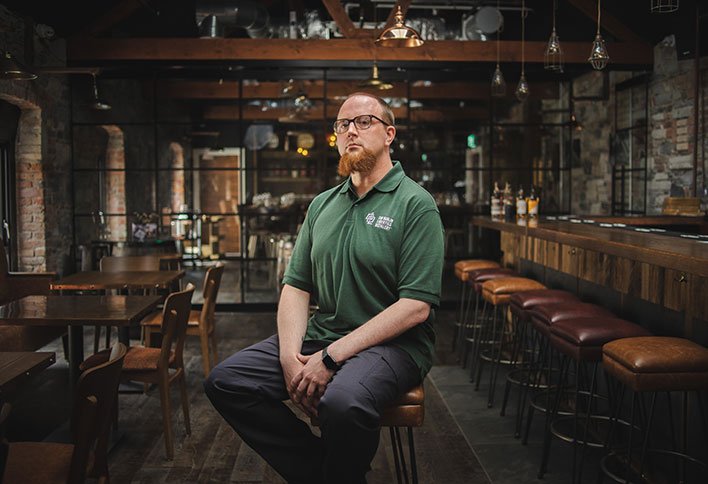 When did you start at the DLD:

Journey to the DLD – what did you do before this role?

Prior to working at the DLD, I spent almost 14 years as a whiskey ambassador at one of the major whiskey visitor centres here in Dublin city. Originally, I was a tour guide, but I soon became responsible for training our new staff and developing tour scripts and tastings, and it was through this aspect of the role that I began to really immerse myself in the science of production. I did a lot of study on my own as an enthusiast, but then completed my General Certificate in Distilling through the Institute of Brewers and Distillers a few years ago.

As time went by, it became clear to me that simply talking about production wasn’t enough for me anymore. With no safety net or any real plan in place, I left that role in 2019 with the goal of pursuing my dream of moving into whiskey production, and the DLD was brave enough to take a chance on me and offer me that opportunity. It’s a dream come true.

Among the range coming from the DLD I’m a big fan of the Dubliner and the Liberties Oak Devil – they’re both superbly drinkable, no-nonsense whiskeys. Outside of our range, I’m a massive fan of Islay malts, particularly Lagavulin, so I was really intrigued by our recent partnership with Rascals Brewery for the Dubliner Smoked Stout edition in the Beer Cask Series. And in terms of other Irish whiskeys, you can never go wrong with anything from the Powers range.

An Old Fashioned, every time.

Away from whiskey, what do you spend your time doing?

I love spending time with my fiancée Christine and our two cats Azrael and Clay. I’m a massive music fan – I play bass in a band called Ritual Effect (check us out on Spotify) and I’ve just retired from coaching after 10 years as the coach of Dublin Roller Derby.

Favourite thing about living in Dublin?

At this moment, I think my favourite thing is the rebirth of craft brewing and distilling. It’s such an exciting time to be working in the industry and to play a part in reviving the legacy of this great city.

The Porterhouse on Parliament Street – this is where my love of craft was born. I learned so much about the art of brewing from simply listening to the bar staff there and following recommendations on some fascinating beers. I honestly believe that there’s a direct link between wandering in there for a few pints when I first moved to Dublin and my role as a distiller today. They lit the spark that has resulted in this spirited journey. Honourable mentions go to the Thomas House and Fallon’s.

PLEASE CONFIRM YOU ARE LEGALLY ALLOWED TO DRINK IN YOUR COUNTRY:

This check is part of our commitment to responsible drinking, and we hope that you enjoy our products in moderation. By entering this site you agree to our Terms & Conditions and Privacy Policy. This website uses cookies to ensure that we give you the best user experience. If you choose to continue using this website, you agree to our use of cookies.